It is important that you keep your membership information current so that we may be sure we are getting you the information you need such as renewal notices, information pertinent to your Area, Overtones, etc. Please take a moment periodically to check that your member profile is up to date. Just CLICK HERE to log in, then choose “Update My Profile” in the “What Would You Like to Do” drop-down menu at the right of the welcome screen.

Please note that any PAYMENTS sent to HMA should now go to the following address:

The William H. Griffin Scholarship provides assistance to qualified individuals for participation in Distinctly Bronze events. Up to two scholarships are available for 2022 West and 2023 East. Scholarship includes full event registration and up to $500 to be reimbursed for travel and lodging expenses.

The massed ringing event for advanced handbell musicians provides the opportunity to perform on the largest handbell sets available under the direction of Fred Gramann. Four days of rehearsal lead up to a Sunday afternoon concert which is open to the public.

Fred Gramann earned organ performance degrees from Syracuse University and the University of Michigan, moving to Paris, France in 1972 for organ study with Marie-Claire Alain and Maurice Duruflé. He served as Director of Music at the American Church in Paris from 1976 to 2022. Fred is the permanent conductor for the Bay View Week of Handbells (Bay View, Michigan), UK Bronze (Sutton Surrey, England), BronzeFest (held alternately in Michigan and Ohio), and has previously served as conductor for both DB East and DB West.

Learn more about Fred and Distinctly Bronze on our website.

Have you wanted to apply for Distinctly Bronze but worry you are not yet at the skill level to be accepted? Then this is the event for you. Scheduled concurrently with Distinctly Bronze East, this event will give participants the opportunity to learn three pieces from the DB East repertoire list under the direction of master teachers and conductors Fred Gramann, and Brenda Austin performing them with the DB musicians on their final concert. In addition, the Reaching for Bronze choirs will prepare and perform two pieces of their own.

Brenda E. Austin is a dynamic and energetic conductor, clinician, and composer, connecting musicians through handbells. She has served as the artistic director of the Detroit Handbell Ensemble (DHE) since 2016. Under her baton, DHE was honored to open the Handbell Musicians of America (HMA) National
Seminar in 2018 and to be the featured concert for HMA’s Area 2 2019 Festival in Lancaster, PA. In 2019, Brenda also joined the team at Hope Publishing Company in Carol Stream, IL as the editor in charge of the handbell catalog.

Learn more about Brenda and Reaching for Bronze on our website.

There is still time to register for Distinctly Bronze West 2022 and book your rooms at the Airport Embassy Suites, Portland, OR. We will be just minutes from the airport and right on the Max line for an easy ride downtown!  The group room rate is $169 (+ tax/fees) per night and includes in-room wifi. If you wish to extend your trip, this rate is available two days prior and two days after the event, based on availability. The self-parking rate is $18/day.

The deadline to book your room is September 9, though we encourage you to book soon. Hotel reservation details can be found on the website.

For our video gamers out there, Forté Handbell Quartet on their “Trio Tour” perform the Super Mario Bros. theme. 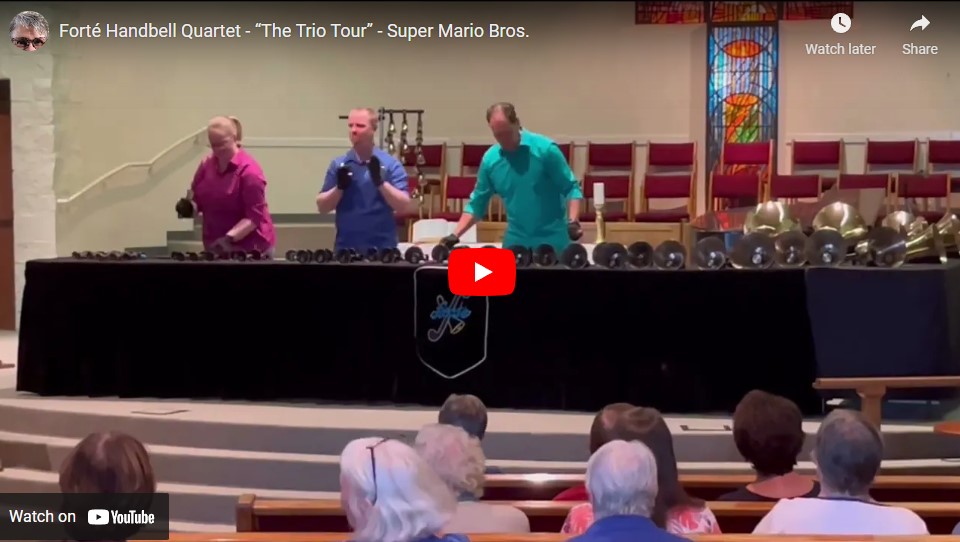 Sakura Melody Fanfare is a beautiful setting of an old Japanese song, arranged for and and played as a fanfare for the entrance of the Crown Prince and Princess of Japan at the first Abilympic in 1981.

Rated level 2 and just 24 measures in length can be easily mastered and rung by most bell groups. This is listed as 4-5 octaves, however there are only ONE bell outside of the four octave range (F3). With some simple adjustments, this could be rung by

many three octave choirs as well. There are two measures in which sixteenth notes are scored. These will not be problematic at the graceful speed of quarter = 60 BPM (both measures also include ritards, making the 16th note runs easily manageable). Check out this beautiful Japanese Melody set for handbells!

Following a scrolling score synced with a recording of this title. Find this and other titles on our YouTube Channel

What was OLD has become NEW!

Check out these classics NEWLY AVAILABLE from AGEHR Publishing