“Michael, whatever you do, just pretend you know about handbells. There’s not much to them, anyway.” That was the advice given to me by a coworker at 20 years old. I was not only a newbie at handbells, but a newbie at life. 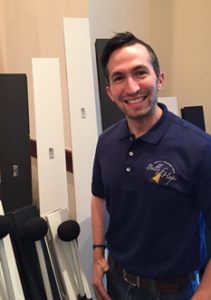 I had only been out of college for about eight months and was hating my daily grind at the ad agency. Any job was preferable, so I had responded to an ad for a church music director. Primary responsibilities: directing the Chancel Choir and two handbell ensembles.

I knew I had the choir part in spades; I was very comfortable in front of vocal choirs, and I had a lot of training for that in college. But what was this handbell thing all about?

It’s hard to believe there was a time “pre-YouTube,” but this was it—by eight years— so I couldn’t even check out videos. And Google didn’t even come along until later that year. Turning to the Internet wasn’t really our “default solution.”

I got the job, but like so many musicians, I just had to “figure it out,” not aware of the national organization that had a wealth of resources to offer me.

After about six months, and I let my former coworker know that he was right: there wasn’t much to this instrument. In fact, I had it “completely figured out” and was looking forward to my first “handbell festival” (whatever that was). There, at a mini-concert given by The Raleigh Ringers, I had my first glimpse into our truly advanced repertoire, and my addiction began in earnest (and I let my friend know that we both had a lot to learn about handbells!).

Fast-forward to 2006. I was working on my Master of Church Music degree at Concordia University Wisconsin. I still didn’t know much about the Guild, but I knew that its National Seminar would be in Milwaukee, right after I was done with my five weeks of summer coursework. I asked my church if I could have extra time to attend the Seminar and was told that, if I got a scholarship, I could go.

I did, and I went. And my life changed almost instantly. I found a group of encouraging, inclusive, fascinating people committed to moving the instrument to an art form I had never even thought of before. My area chair learned I had advertising experience and asked me to edit our Area 3 newsletter (38 issues later, I’m still committed to it). I received my first publishing contract and my first festival invitation within a year. And I began relationships with friends that have truly become a second family.

Nearly ten years later, giving back to the Guild comes naturally to me. In addition to regularly attending and serving at national events, I have supported the Guild as a New Initiatives contributor and Certification instructor. I was an early adopter of the Heritage Fund, to which I make regular monthly contributions. I also contribute to scholarship funds, and I have included our organization in my estate planning through the Legacy Society.

When I think about the doors this organization has opened for me professionally, the marvelous things it has done for me creatively, and the friendships that will endure indefinitely, I can’t help but want to give back. Please join me in making an end-of-year or recurring gift to Handbell Musicians of America and enable our Guild to bring its life-changing instrument to others..

Join Michael with your gift of $30 or more and help us continue to provide training and educational events for both new and seasoned new handbell directors and musicians and develop new resources for handbell musicians at all levels of skill and experience.