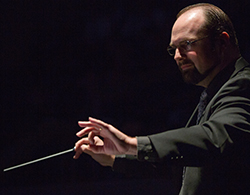 This was the moment I realized that handbells and handbell ringing were truly something special. It was 1994, and I was attending my first-ever handbell festival in Cedar Rapids, Iowa. The above conversation took place after my older brother, Greg (he was 16 at the time), finished performing Christine Anderson’s solo arrangement of “Parade of the Tin Soldiers” at one of the festival’s showcase concerts. I had known my brother was a great solo ringer, but to see his ability be celebrated in such a way by the hundreds of attendees was a moment that really stuck with me.

Other memories from that festival are quick to rise to the surface as well: Hart and Marty Morris as our conductors (“Ring the fire out of that G4!”), and seeing our current guild president, Ed Rollins, for the first time. The Ed Rollins memory is quite a distinctive one, actually. To a 13-year old kid in the 90s, two TV shows were all the rage–the long-running Full House and the newly aired America’s Funniest Home Videos. What does that have to do with Ed? Well, he looked a bit like Bob Saget.

Between being surrounded by handbell celebrities (Hart and Marty Morris), someone who looked like a TV show celebrity (Ed Rollins), and the energy of handbell enthusiasts, you could say I became truly hooked.

I had first rung handchimes in 1989 (now a year of infamy, thanks to Taylor Swift!) and really did not know anything about the Guild until attending this first Area 8 festival. My handbell director through those years, Ione Burham, always sang the Guild’s praises and knew the value it offered to its members. Since I was not directly a member at the time, I really didn’t pay much attention, I just wanted to play handbells. However, it was because of Ione’s membership in the Guild, and the commitment to the youth of our church, that we continued attending Area 8 festivals in the 90s: Omaha, Nebraska, in 1996 (yup, I was in the hotel basement during the tornado!), and Springfield, Illinois, in 1998. Without the Guild, and what it offered and represented to my handbell director, these events would not have been possible for us young ringers.

I had just finished my junior year of high school by the summer of 1998, and like most kids that age, college seemed frightening, mysterious, and yet wondrous all at the same time. I was very unsure about my college plans until this magical thing called the Internet helped me find the one place where I could major in handbells: Concordia University in Irvine, California.

I completed all the application materials, and soon afterwards found out that one of Concordia’s handbell teachers, Nancy Jessup, was going to be a clinician at the Springfield festival. I attended all her classes and made a goal for myself to perform a solo at that year’s showcase concert. In essence, I felt like this was my audition and interview, even though it was about 2,000 miles away from the campus! Needless to say, without the Guild, I would not have had the opportunity to learn from amazing, passionate handbell musicians to become a better ringer.

College came and went very quickly. Ringing handbells at Concordia, Irvine, will always be a highlight of my life as there were so many magical moments. Solo ringing, small ensemble ringing (and meeting my wife–totally Nancy Jessup’s fault!), and learning not only how to perform musically, but learning how to teach others these skills. Both of the handbell directors at Concordia, Dr. Herb Geisler and Nancy, have enriched hundreds (actually, probably well over a thousand) different handbell students during their tenures there. It was also during these years that Nancy and Dr. Geisler encouraged me to continue attending Guild events whenever I could. Palm Springs and Des Moines for seminars, and then a Masters Class in conducting with Dr. William Payn in 2005. The handbell seminars were not that new to me, since I had participated while growing up in Area 8. However, the Master Class was an entirely new experience. Without the Guild, I would not have had the opportunity to increase my skills as a conductor under the baton of a master.

It was this Master Class in 2005 that not only provided an amazing learning environment as an up-and-coming conductor, but was also where I made the connection that fast forwards to where I am today.

As we all introduced ourselves to each other in the class, one individual spoke up and said she was the handbell teacher at a private school outside of Washington, D.C. As we all inquired about this particular job, we came to understand that this was all she did. She directed handbell ensembles. As a job. And got paid! The words I said in that moment were something to the effect of, “I would love to do that someday!” Well, shortly after that Master Class, this person reached out to me and said that this was going to be her final year teaching at the school and encouraged me to apply for the position. I was floored that she thought of me. I did apply for the position, and now, 10 years and hundreds of students later, I’m still here. Without the Guild, I would not have been able to network with others, sharing experiences for new ideas and opportunities.

It’s interesting how this has come full circle. I start a new 5th grade ensemble each year at my school, and it is during this class that my new ringers come to understand the passion I have for this instrument and the potential for amazing music and teamwork. Whereas I have had many amazing teachers and mentors on my path (Ione Burham, Ed Rollins, Dr. Herb Geisler, Nancy Jessup, Dr. William Payn), it is my personal goal to be an amazing handbell teacher to these youth. They do not yet understand the value of what the Guild offers. However, as these students continue growing and performing, they will begin to recognize how this organization has assisted not only their teacher, but so many others. The Guild offers opportunities. The Guild offers resources. The Guild offers connections.

I have been teaching just long enough now that former students have graduated college and are seeking ringing opportunities. I always know just where to look.

Join Nick with your gift of $30 or more and help us continue to provide training and educational events for both new and seasoned new handbell directors and musicians and develop new resources for handbell musicians at all levels of skill and experience.