My association with Handbell Musicians of America has spanned over 30 years. In the mid-1980s, I was one of those music directors who purchased three octaves of handbells and didn’t have a clue where to get the training I needed for this instrument. HMA fulfilled that role in my music ministry. Little did I know that the next 30 years would give me opportunities to travel, teach, conduct and represent handbells around the world. I was one of those fortunate individuals whose day and night job involved handbells. 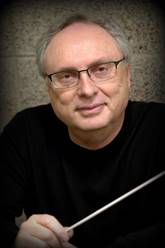 Seeing this musical art form through the eyes of the handbell industry allowed me to see how handbells could impact and unite people around the world. Not only has HMA given direction to groups and individuals in our country, but they have served as a model of leadership for handbell guilds across the globe.

I’m IN because I ring
and believe in their mission and vision.

I once thought that my financial contributions were small and insignificant, that someone who increased their membership by $25 annually wouldn’t be classified as a big giver, but then I realized that I actually represented the common man.

What if half of the membership gave the same thing? That could translate to $62,500 of increased support which could fund several projects! So I gave an extra $25 this year to my membership.

I took it one step further. I’ve recently joined the Legacy Society. It’s not with a huge contribution, but I started with setting aside $1,000 at first with the option of increasing it as more funds become available. I know it’s not the $10,000 gift that some have given, but it’s where I am now. If 250 members did the same, that adds up to $250, 000. If half the membership did the same that could translate to $2.5 million dollars. That’s big!

It’s the small stuff that adds up. Years ago I started throwing my loose change in a jar and resolved to not spend it until year’s end. To my amazement, I would gift myself about $200 without even feeling the pain. What if you took your loose change jar and gave it to HMA for the next three years? Fifty people taking the challenge for three years could be $10,000/year or $30,000 for three years.

Please join in offering your continued support of Handbell Musicians of America.

Join Kermit with your gift of $30 or more and help us continue to provide training and educational events for both new and seasoned new handbell directors and musicians and develop new resources for handbell musicians at all levels of skill and experience.